Shining a spotlight on men’s achievements, winners of the 5th Annual EMY Africa Awards were announced on Saturday, July 4.

The EMY Africa Awards is produced by Carbon AV Ltd. Widely recognised as one West Africa’s premier and widely watched personality awards, this year’s edition was no different.

Due to the COVID-19 pandemic, some tweaks were made to this year’s event. Most noticeable of all the changes was that only nominees and presenters were invited to this year’s event. All honourees and nominees were given different time windows to receive their awards so that at any point in time, not more than 80 people would be in the ballroom. This safety precaution pushed the duration of the entire ceremony to 9 hours.

Some of the other precautions taken were the demand for all attendees to wear face masks as well as temperature checks at the entrance. Automatic hand sanitising machines were also placed at vantage points.

Ernest Bediako Sampong, CEO of Ernest Chemists Ltd won the flagship award, Man of the Year. Below are the other winners: 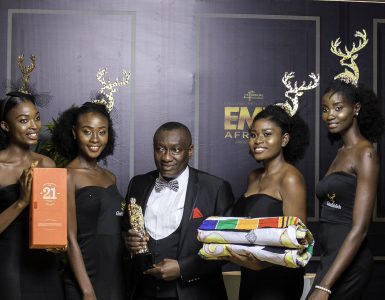 EMY AFRICA AWARDS 2019 The 4th Edition of Exclusive Men of the Year Africa Awards took place on Saturday the 22ndof June 2019, at the Kempinski Gold Coast Hotel. It rolled past its four-hour mark, live on Joy Prime and...

EMYAFRICA 2018 WINNERS The EMYAFRICA 2018 winners have been announced; the 3rd edition of Exclusive Men Of The Year Africa Awards (EMYAFRICA) took place on Saturday the 18th of August 2018, at the Kempinski Goldcoast...

When the African Giant Rises